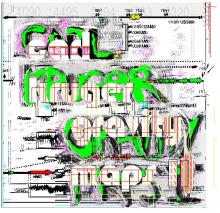 These tracks were the outcome of attempting to wrangle as many interesting sounds out of a mixer with the gain turned up on each individual channel while 1/4 inch chords (plugged into only the mixer) fed back, buzzed and hummed.
In a nutshell, this approach employed feedback looping and other minimal-input tinkering, using two busted RadioShack mics, a noisey little mixer, a bunch of faulty chords, one cheap distortion pedal, one effects rack mount thing (Zoom 1204) and a pair of headphones for more feedback.
All material recorded onto four track, thus each track contains four layers of sound.
Various effects, primarily chorus and reverb, were used sparingly to create depth and distinction.
By the way, the individual layers, they were used in real-time as the layers were recorded to tape.

I was trying to get as close to the sound of the machines / equipment themselves, focusing on all the incidental sounds that are usually viewed as undesirable by-products of them (hums, squeaks, et al ;)
The more pronounced modulations originate from the overdriven gains on the mixer pushing its naturally occurring hum into the red, where the signal seemingly disappears beyond the audible range of human ears.
Fun! No vocal sounds, keyboards, computer generated samples, or instrument
sounds were used in these recordings.
The lone exception of an outside source being the sound of a plane flying over at 11:30-11:39 in the third track, which sounds incredibly well placed for it having been a coincidence.

As the title suggests, this is the second in what will be an ongoing series of releases I plan on producing.
The initial gravity maps was released October 2007 on the Norwegian label Ambolthue, as both a limited edition CD-R as well as an MP3 release.